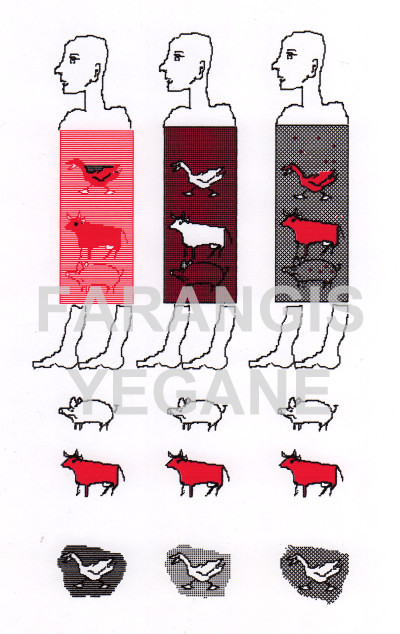 Some guy who runs a weird type of grocery chainstore (he himself is an acclaimed person in the anthroposophical scene and is thus into producing organic “produce”, although his grocery store, which makes up one part of his enterprise, sells everything … too ) in Germany said he has some bacon-meat-sausage-flesh-crap produced and he would have the bacon smoked, accompanied with classical music (it’s live musicians that come around to do the job even), cos he believed there is “still some soul” in the “meat” and it’s just right if this “soul” gets some classical music for it to get smoked. Yet another apex of the evilness of speciesism.

It’s sick how on one hand people with such forms of fullblown speciesist mindsets do attribute a soul to nonhuman animals as the individuals whom they negate and kill, while proudly revealing at the same time how they want to be empty of the ability to understand things ethically.

Such speciesist entrepreneurs hold up the idea of the “edible carcass”. A conscious grade of necrophile perversion.

That reminds me of a TV commercial here several years ago, by a big sausage company. They tried to give the impression it was a small company run by one nice man. In this commercial, this man is sitting out in the forest, surrounded by trees, and there is country music playing loudly. And the man says he’s playing country music for the trees, because then when the trees are burned to smoke the sausage, it will produce a better flavor.