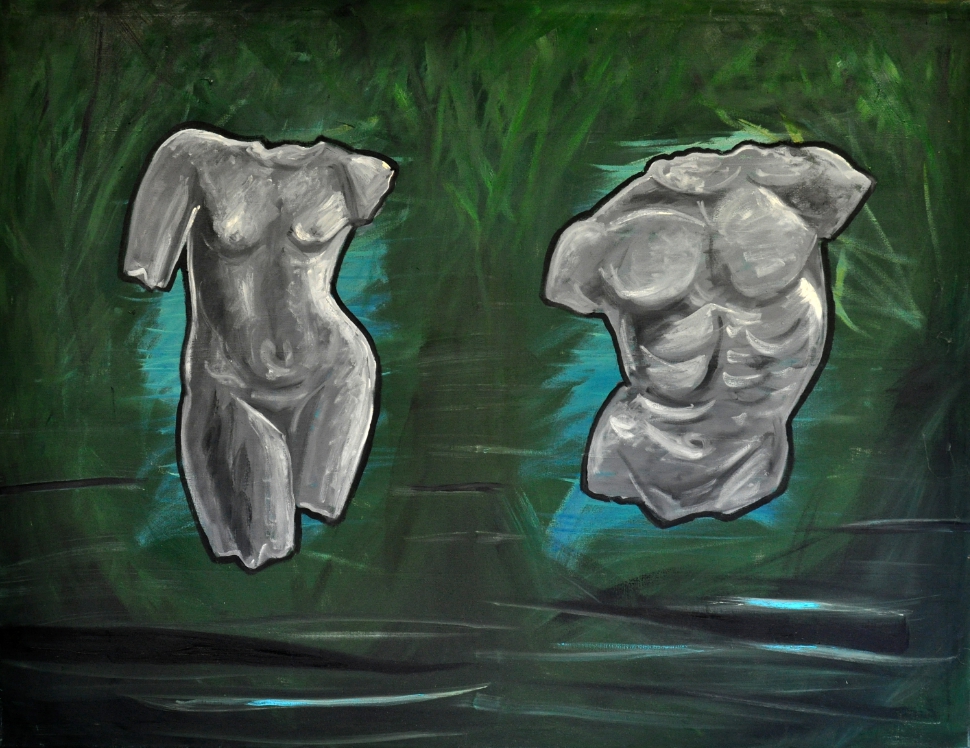 A.) I set forth following anchor points, before I start on the topic: 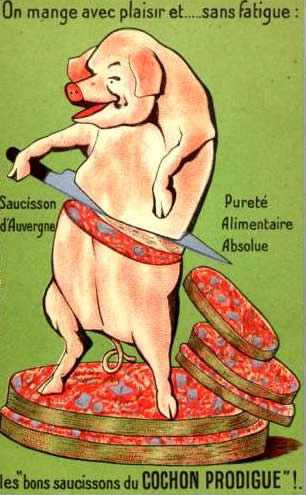 The image is severely speciesist. It’s not fathomable why some feminists make that comparison between the “treatment” or I guess rather the objectification of women in advertisement etc. with “meat”? There is obviously an perverted aesthetical connection thought by speciesist rhetorics, but it leads us into a direction which should be further looked at and not just taken by the superficial “meaning” of such iconography.

“Meat” is a solely speciesist problem, unless we would speak of necrophilia and cannibalism.

B.) Feminism and Animal Rights: the one way or the other

“Meat” is flesh, and it’s the result of a human/humans killing a nonhuman animal/animals.

We should be careful with attaching own sociological issues to such a major own concerns such as Animal Rights in an analogy, which sets itself so close to the subject of comparison, that the story lapses and gets one-sided and a new and important perspective gets neglected instantaneously.

All Animal Rights issues need an own valid terminology and frames of reference, otherwise we are risking to blur the lines of differentiation.

The analogy of sexism and speciesism fails when applied superficially and in an undifferentiated way also because…:

Two main points why Animal Rights issues can’t be tied to a strict feminist viewpoint, as long as feminism is used as excusing women from the ethical responsibilities in society towards their nonhuman environment.

The sociological dynamics of gender in their effect of speciesist attitudes and actions should be addressed of course, but there is no reason inherent to “biological” gender (if we would go that path) that would prove that “men” or categorically more speciesist than “women”. Also the way in which roleplay is happening in systems of oppression should be addressed, i.e. “women” taking the role of cooks, or preparing the speciesist meals, of wearing feathers and fur, etc. male roles, roles that are swapped, (I am not extending on this here).

C.) Close analogies … also of genocides and speciecides and their deficits

These types of close analogies in the field of -isms and abuse work in a valid way when we look at the psychology of the perpetrator who seeks to create a victim: the aspect of exerted violence shares many similarities, whereas however on the side of the victimized we have to see the contexts: political, enviro-political, historical, sociological, … a group or an individual gets picked as a victim for reasons, and those exact reasons need to be analyzed under own terms, and not be conflated. In terms of speciesism, we face many forms of speciesism (i.e. religious, scientific, legal, philosophical, etc.). 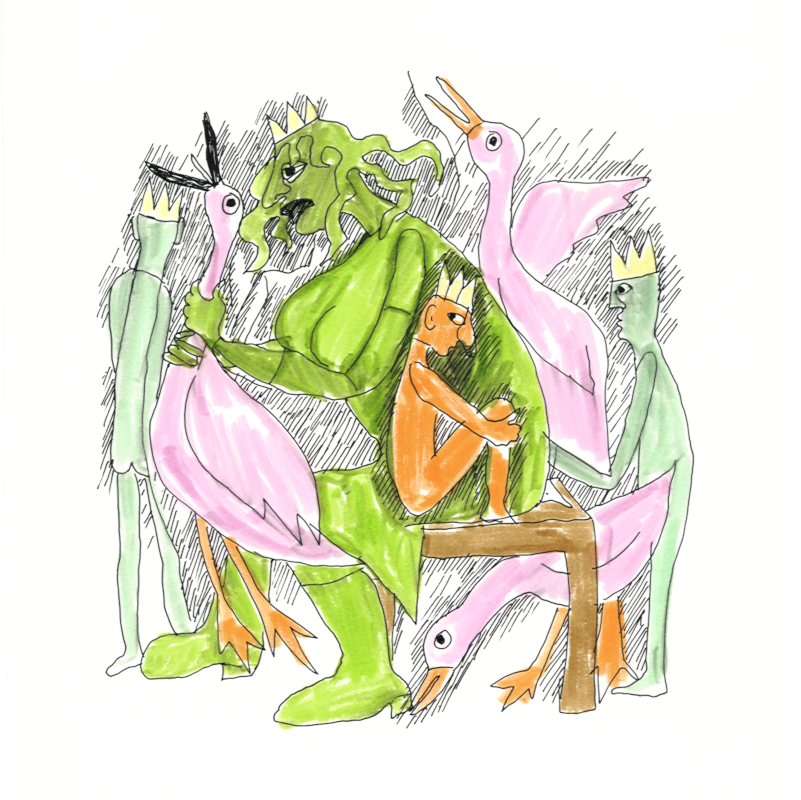 Is a self-critical view on gender / being a woman / feminism necessary?

What would speak against it? We know that in our daily lives we, as “women”, make decisions that touch on core grounds that turn the private/the personal into the political (https://userpages.umbc.edu/~korenman/wmst/pisp.html). As antispeciesists we know with our vegan praxis just how impactful our personal choices are, and as social beings we also know how hard it can be for us to draw a line between the social expectations that one tries to fit in (in order to find a job, to be liked or accepted, to keep ones social ties or family structures/felt obligations together, and so forth) and our political ideals and ethical, pressing necessities when both might stand in conflict with each other in times of societal change. Our human social environment might be heavily speciesist and we have to get along with it, somehow yet still inspire change, for instance.

Speciesism, as remote as it seems, is to be found at the same point where my-choice-to-decide-otherwise-or-not crosses just any implications of socialization that I feel are ethically unjustifiable. When I rant against sexism I might as well rant against an injustice that targets nonhumans, if I am a vegan anti-speciesist minded person.

Speciesism can be understood to work socially as an ideology, where people who are convinced of their degrading stance, believe in a collectively held fiction that is assumed and agreed upon as “objectivity”, so that no rebuttal can take place on “rational grounds”.

Women do feel at home in this construct inasmuch as men do, on the large scale. Both 50 percent of humanity, male and female, believe so much in human superiority that they are willing to constitute part of a speciesist society by fulfilling their individual part in the fiction.

“Gender” defines itself from interaction within a group or society. Being oppressed as a woman doesn’t automatically mean that you can’t be oppressive towards nonhuman animals. Drawing an analogy between sexism (or genderism) and speciesism does not take account of the different reasons and histories why the victim gets oppressed in the first place – for what ends, and how exactly. If we turn a blind eye on the gender specific functions of speciesism and anthropocentrism we might risk a loophole in our argumentation for our own rights defending nonhumans and for integral Animal Rights themselves.

Speciesism is a unique tragedy. The history of being classified as “animals” by humans, with all that entailed, as beings whose existence had been on earth eons before humans evolved, can’t be compared to any other form of oppression by a strict analogy. Being objectified as solely “animate”, being slaughterable, edible, huntable, vivisectable, being objectifiable and judged as “definable”, in the first place constitutes a specific situation for the affected subject, and hints at a unique technique of injustice taking place here on behalf of the oppressive side that is being applied to this particular victimized group.

Comparisons between different forms of oppression are extensively helpless efforts when oppressor and oppressed are as entangled as in the case of speciesist human oppressive settings.

We could straightforwardly name that natural sciences, religion, philosophy, mass society have to end classifying the beings we call “nonhuman animals”, or we stay stuck in our psychological accompliceship with the very hierarchical and oppressive systems that we criticize so vehemently as what regards our own pains.

I don’t see an alternative as of yet. The ecofeminist and feminist discourse in Animal Rights and Animal Liberation (Karen Davis, Marti Kheel, Lori Gruen, Carol J. Adams, Kim Socha, Vasile Stanescu and so forth) is pluralistic enough to lead and continue their differentiated discourse I believe and I thank them for doing so.