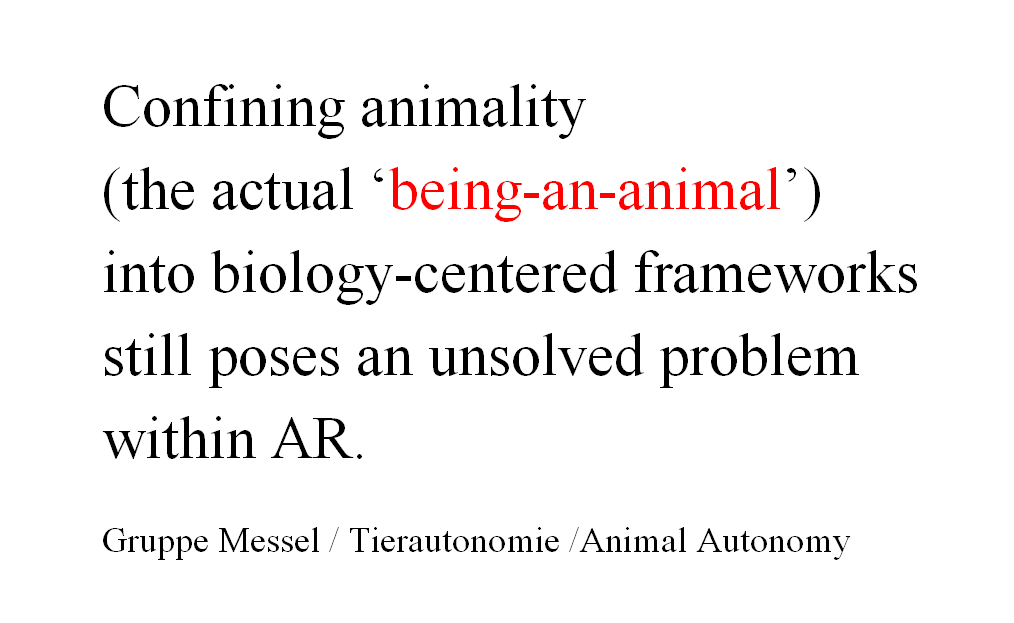 How does someone view other animals:

Changing the images society and people have constructed in their thinking and in their outlooks about animality takes more than our vegan lifestyle, more than campaigning for final goals. It needs that we straightforwardly postulate (emancipation!) different viewpoints, different angles of viewing the world’s animal individuals, their socio-ecological contexts, and their cultures in the given oppressive contexts.

From a biology-centered viewpoint people/society want to assume that nonhuman animals don’t decide, don’t think, don’t reason, don’t experience oppression in contexts of their evolutionary cultures. A biology-centered viewpoint compares animality with humanity and pinpoints certain physical functions as markers for the ability to ‘reason/think’. Philosophy again constructs a notion of borders within reasoning around the human self or certain human selves.

It takes more than animal liberation on the physical level to change and widen the perspectives on human-nonhuman conflicts, quite obviously. Saying this, nonhuman animality isn’t solely a recipient of oppression exerted by human beings in their cultures; in contrast I believe that the human forms of oppressing nonhuman animality has a lot to do with the agency of animality on levels our society typically ignores, levels our society might not have tried, been able or willing to name, but these levels are parts of the animal-nature-continuum and the big scope of its cultural wisdom, richness, smartness, cultivatedness, decisiveness … .

Just try it, you might very well know how cultures aren’t restricted to humanity – that we all need to build new perspectives on animality, animal individuals and on the entire social codes built between humanity towards animals. Try and ask your vegan friend what she/she makes of establishing an emancipated view (in regards to language, philosophy, and common sense) on the human-animal conflict and human-animal interaction. I assume she/he still thinks that it’s perfectly fine to keep the cornerstones of speciesism in the “active-mode” (i.e. religious speciesism, philosophical speciesism, speciesism in the natural sciences, sociological speciesism, legal speciesism, cultural speciesism, aesthetical speciesism, speciesism in all segments of how we define the scope, meaning, content, value, sense of life) and that she/he will try to not seek for new ways of ending the ‘massmurder taking place on the biological argument’, the individual degradation on the level of cultural difference between speciesists and nonhumans. They will however not be able to accuse you of anthropocentrism, because they can’t rule the aspect of animal-cultures-on-more-than-the-biological-level out.