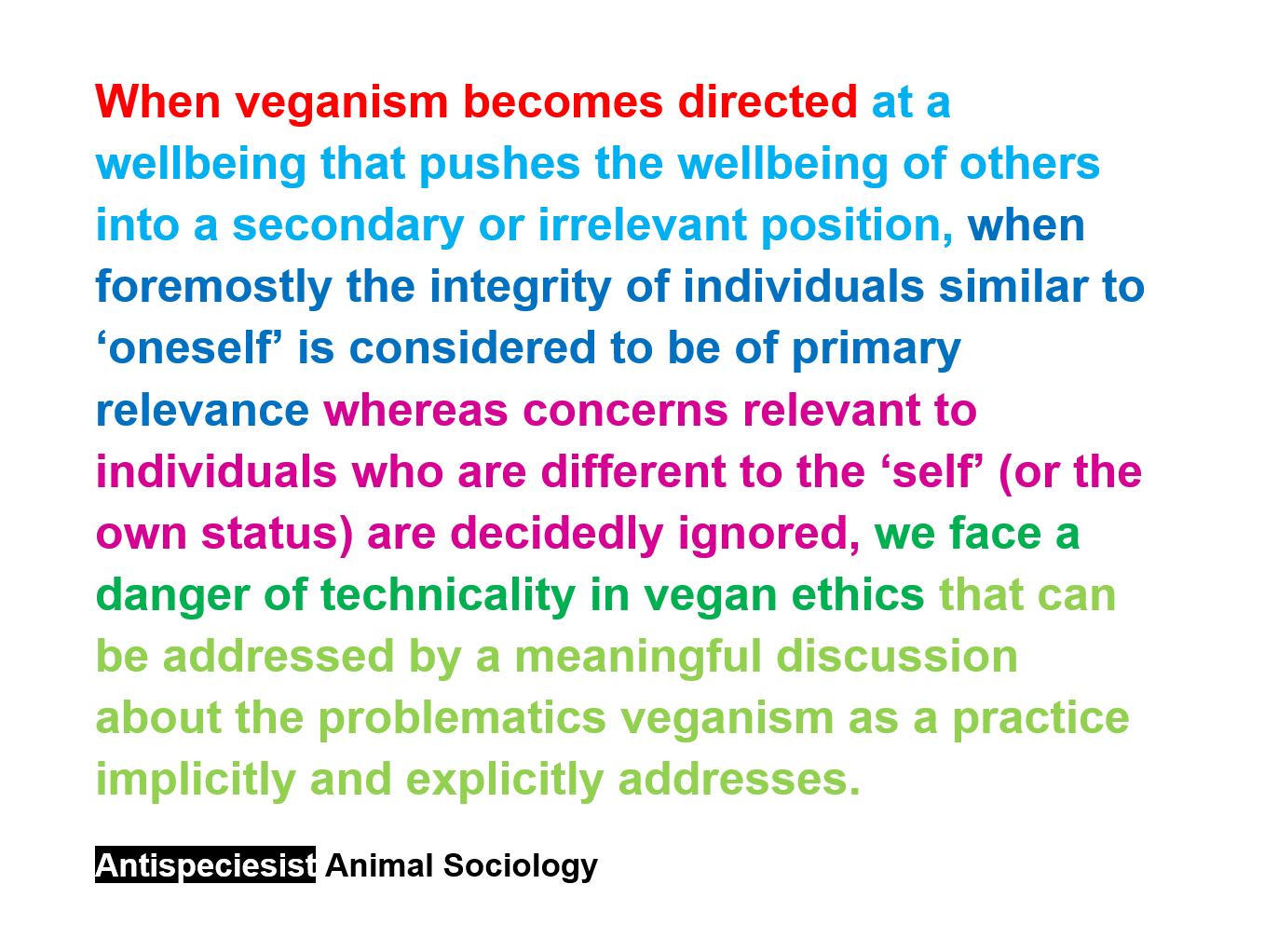 I met a lifelong vegan who says that killing nonhuman animals would be totally okay in this person’s opinion.

This makes me think that:

It made me feel very upset to hear such an attitude from a lifelong vegan. I wonder why someone in that case even wants to call him- or herself a vegan, when they consciously exclude nonhumans from the frame of their constructive ethical relations and when they practice blatant speciesism.

Veganism unfortunately is still working much at the level of a trend, and I think it is exactly a trend for the reason of a raising moral and ethical awareness and growing sensitivity towards speciesism in society but that nevertheless veganism being a “trend” mostly serves as a buffer, it makes you cleared of guilt and blame, yet a vegan person might still reserve for themselves a speciesist stance in society so as to keep being mainstream. Some vegans hold a conservative position insofar as they want to cater to the omnivore mass society.

I said to that person that I feel offended and that to me saying killing nonhuman animals for consumption is okay would be similar to bigots telling me that racism was okay or sexism, and that I think it’s problematic that when I talk about this perspective of mine, my standpoint would easily be counted as provocative and inappropriate, from that mass-oriented standpoint which makes the human-nonhuman-animal divide, in which it is okay to objectify nonhumans.

This experience makes me frustrated at how fellow vegans can be basically only technically be vegan yet practically be avid speciesists. I tend to think this is a legacy of the vegetarian movement, which emphasized to much on health issues instead of leading a debate about ethics such as the antivivisection movement comparably did ( – talking about the European debates of the late 19th and the early 20th century), also it’s an ongoing inheritance of “human” hierarchism towards nonhumanity.

Ethically being a technical vegan is an interesting position to be in, yet I think it’s out of a sensible line.

When veganism becomes directed at a wellbeing that pushes the wellbeing of others into a secondary or irrelevant position, when foremostly the integrity of individuals similar to ‘oneself’ is considered to be of primary relevance whereas concerns relevant to individuals who are different to the ‘self’ (or the own status) are decidedly ignored, we face a danger of technicality in vegan ethics that can be addressed by a meaningful discussion about the problematics veganism as a practice implicitly and explicitly addresses.