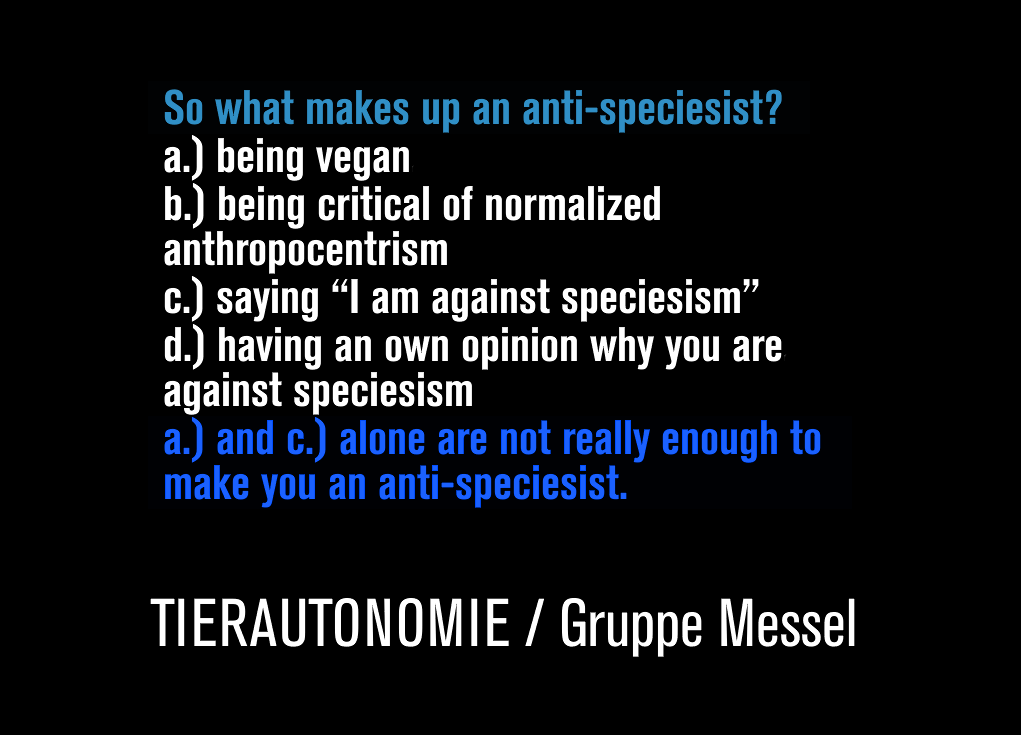 This is a quick draft – some questions that I’d like to put, after thinking about why we still encounter a lot of speciesism even within a vegan context. What do you think: Do you feel that veganism has the tools ready for eliminating speciesism in society’s thinking and action?

Is there more anti-speciesist praxis that veganism can contain?

How much anti-speciesist praxis does veganism contain?

The omission of all animal products and derivatives. The avoidance of some cultural practices that involve speciesism.

Not necessarily, veganism still does tolerate an insensibility toward some overt and a variety of subtle forms of speciesism, it does however exclude “mild speciesism”, such as is pomoted by several authors famed for their animal rights advocacy.

How speciesist is veganism?

This question depends on whether ignoring branches of societal factors of speciesism automatically makes you a speciesist yourself – even if you avoid as many animal products as possible.

You can for instance agree with a speciesist perspective while assuming you’d be vegan for ethical reasons, as long as that speciesist perspective is not yet covered by the canon of common vegan ethics. An example would be the question of using animal body parts in art, or philosophical and religious theories that empower the human oppression and exploitation of nonhumans, as precursors to their physical exploitation and humiliation.

How speciesist can veganism be?

A good example of this dilemma is the veganic practice, which so far does exclude nonhuman animals from living in mixed communities within their veganic projects. We only know of one veganic project, namely that of the Animal Place sanctuary, which promotes a shared habitat for humans and former farm animals.

Another problem is political inactivity and an ethical disinterest in questioning consumerism, and in the destruction of habitat driven by our economic systems. Veganism can effectively only operate on an interrelated basis in the end of the day; speciesism and other forms of societal discrimination are sociological problems, veganism very much operates on the level of alternative consumption and living practices – all happens within the same political spaces of society and environment/s.