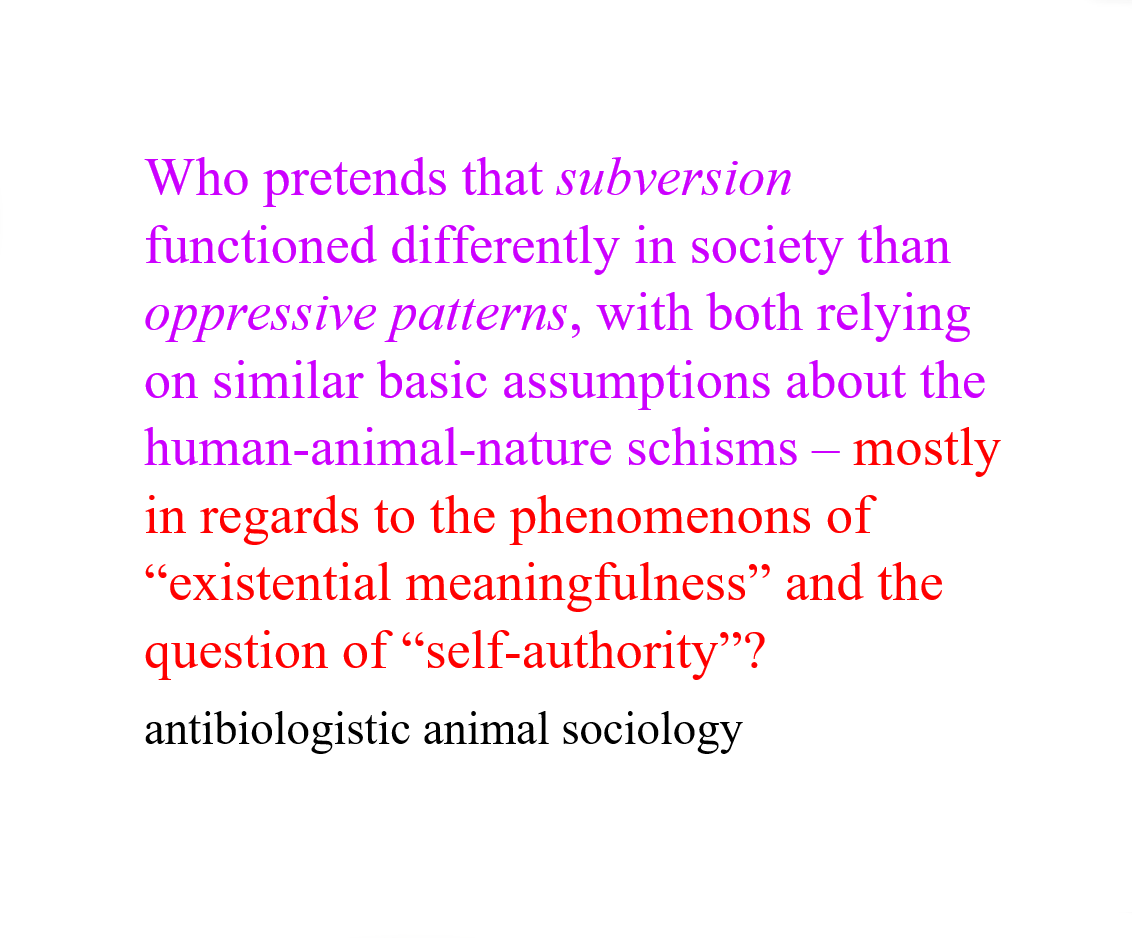 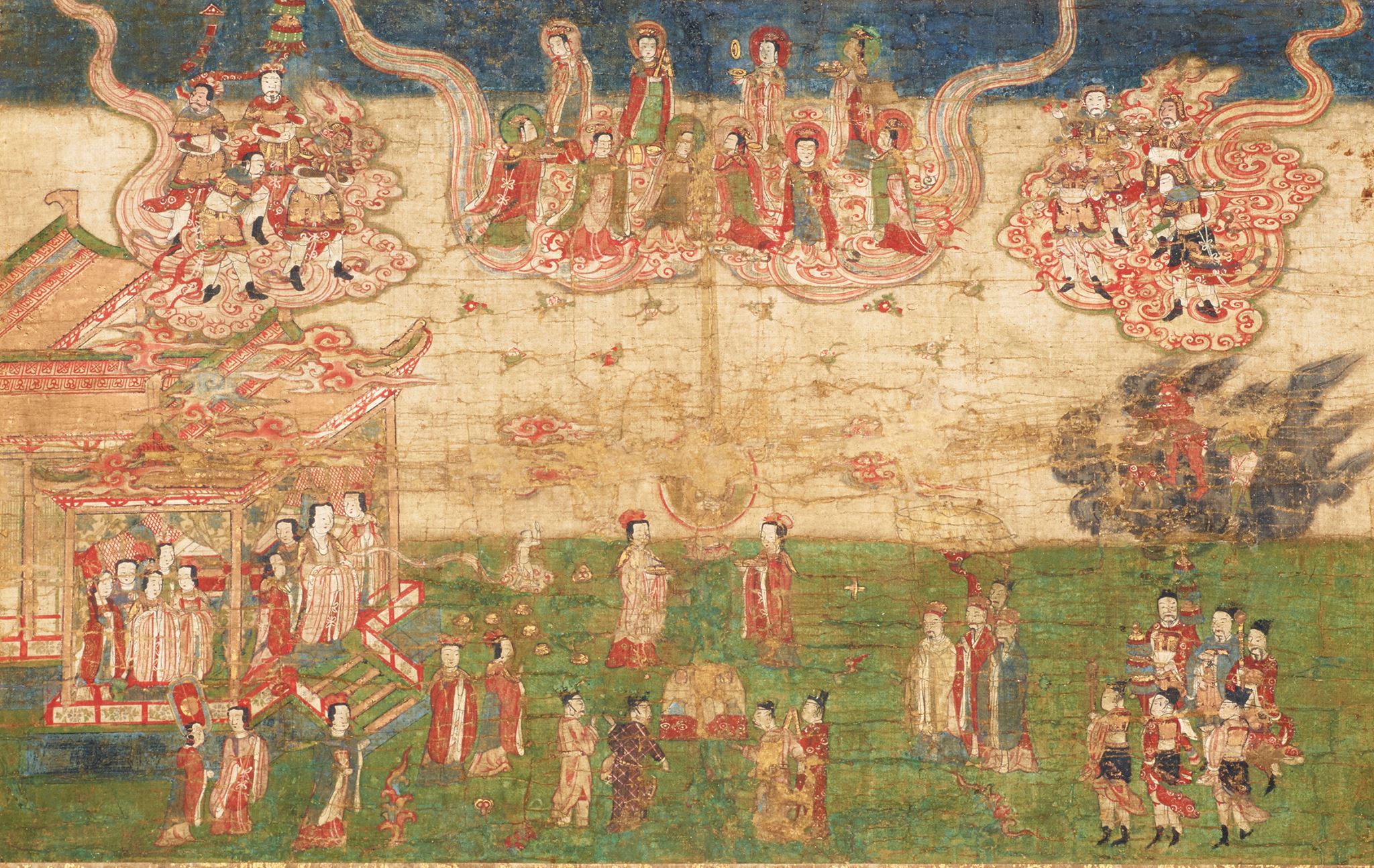 St. Augustin: The Writings Against the Manichaeans and Against the Donatists, vol 4 of A Select Library of the Nicene and Post-Nicene Fathers of the Christian Church, ed. Philip Schaff (Buffalo, 1887; Google Books: Online Library of Free eBooks).

Augustin informs us that the Manichaens in “abstaining from the slaughter of animals and from injuring plants” called “the destruction of a tree or of an animal murder,” with the belief that “in the case of men, we have a community of rights…the same in the case of beasts and trees.” (84)

Flesh, you [Manichaeans] say, is made up of pollution itself. (79)

[According to the Manichaeans] part of God…exists in corn, beans, cabbage, and flowers and fruits. From the beauty of the color…and the sweetness of the taste; this is evident; and as these are not found in rotten substances, we learn that their good has been taken from them. (80)

The [Manichaeans] story…is that the heavenly princes who were taken from the race of darkness and bound, and have a place assigned them in this region by the Creator of the world, have animals on earth specially belonging to them, each having those coming form his own stock and class; and they hold the slaughters of those animals guilty, and do not allow them to leave the earth, but harass them as much as they can with pains and torments. (85)

What [Manichaeans] object to in sacrifice is the slaughter of animals.…You [Manichaeans] are merciful to beasts, believing them to contain the souls of human beings. (169).

Augustine asks why “if you [Manichaeans] will not eat flesh why should you not slay animals in sacrifice to your God, in order that their souls, which you hold to be not only human, but do divine as to be members of God Himself, may be released from the confinement of flesh, and be saved from returning by the efficacy of your prayers? Happy vegetables, that, torn up with the hand, cut with knives, tortured in fire, ground by teeth, yet reach alive the altars of your intestines! Unhappy sheep and oxen, that are not so tenacious of life, and therefore are refused entrance into your bodies! Such is the absurdity of your notions.…Why do they not act up to their opinions about other things as well as about animals? Why do they not abstain altogether, and starve themselves to death, instead of persisting in their blasphemies? (170-171)

You [Manichaeans] consider it a crime to kill animals, because…the souls of men pass into them.…[Gentile philosophers] dreaded slaughtering a relative in the animal; but you dread the slaughter of your god, for you hold even the souls of animals to be his members. (261)

And although at first the following two passages might suggest that Augustine was an abstainer of animal food himself, a few lines at the end of the paragraph as well as his continued tirades against “the Manichaeans prohibition against the use of flesh,” confirm that this is not the case.

Many who are strong [abstain] for the sake of the weak; with many the reason for so doing is…but that they may have a cheaper diet, and may lead a life of greatest tranquillity, with the least expensive provision for the support of the body.…Those, then who are able, and they are without number, abstain both from flesh and from wine for two reasons; either for the weakness of their brethren, or for their own liberty. Charity is principally attended to. There is charity in their choice of diet, charity in their speech, charity in their dress, charity in their looks. Charity is the point where they meet, and the plan by which they act. To transgress against charity is thought criminal, like transgressing against God. Whatever opposes this is attacked and expelled; whatever injures it is not allowed to continue for a single day. (61)

It is clear, then, I think for what end we should abstain from flesh and wine. The end is threefold; to check indulgence, which is mostly practiced in this sort of food, and in this kind of drink goes in length of intoxication; to protect weakness, on account of the things that are sacrifices and offered in libation; and, what is most praiseworthy of all, from love, not to offend the weakness of those more feeble than ourselves, who abstain from all things.…Prove then to me your doctrine that flesh eating defiles the eater, when it is taken without offending any one, without any weak notions and without any excuses. (79) 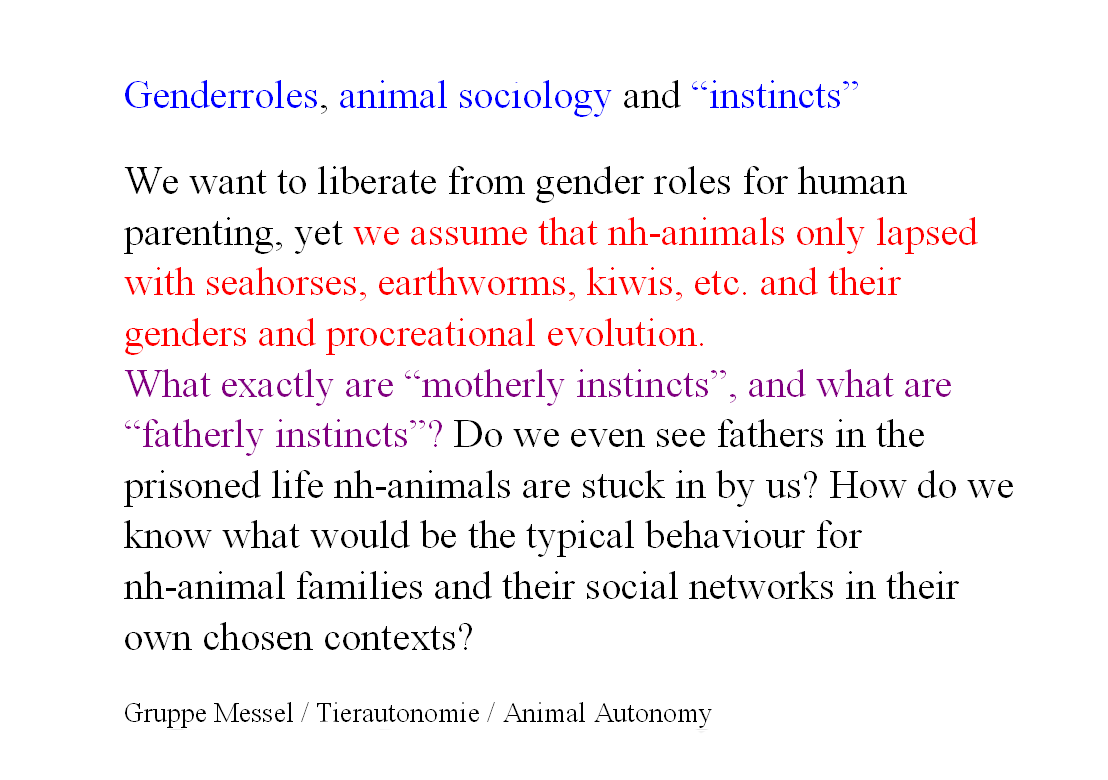 Genderroles, animal sociology and „instincts“
We want to liberate from gender roles for human parenting, yet we assume that nh-animals only lapsed with seahorses, earthworms, kiwis, etc. and their genders and procreational evolution.
What exactly are “motherly instincts”, and what are “fatherly instincts”? Do we even see fathers in the prisoned life nh-animals are stuck in by us? How do we know what would be the typical behaviour for nh-animal families and their social networks in their own chosen contexts?
— 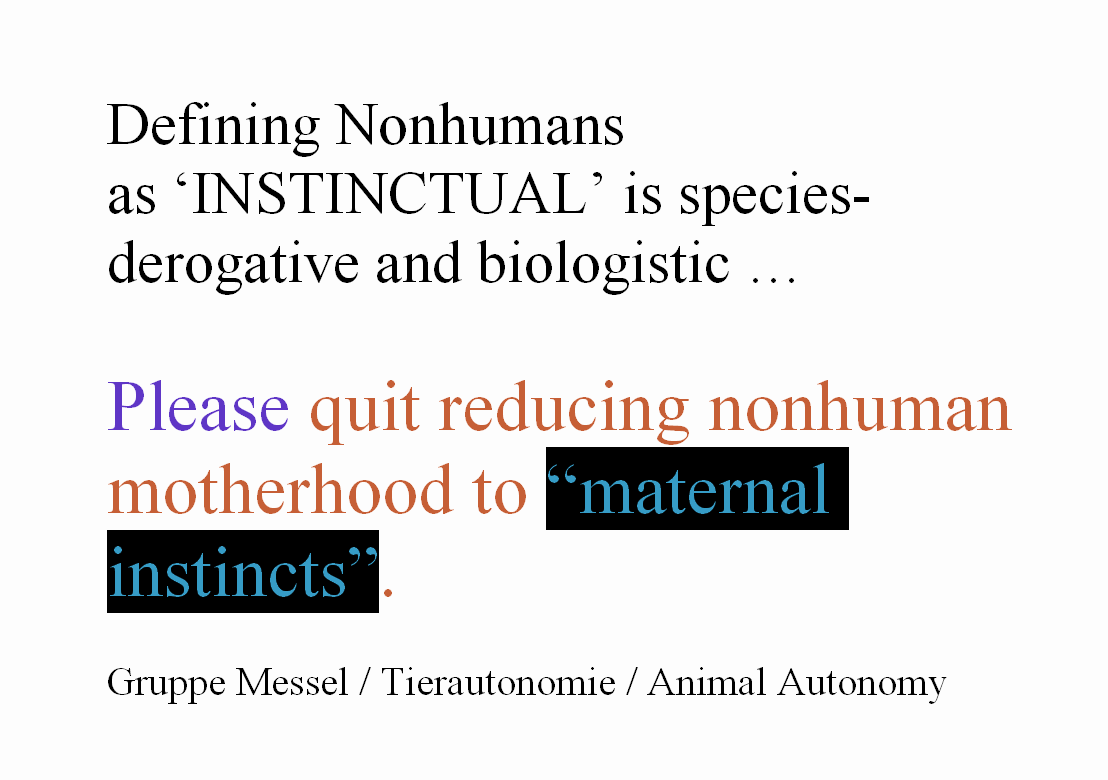 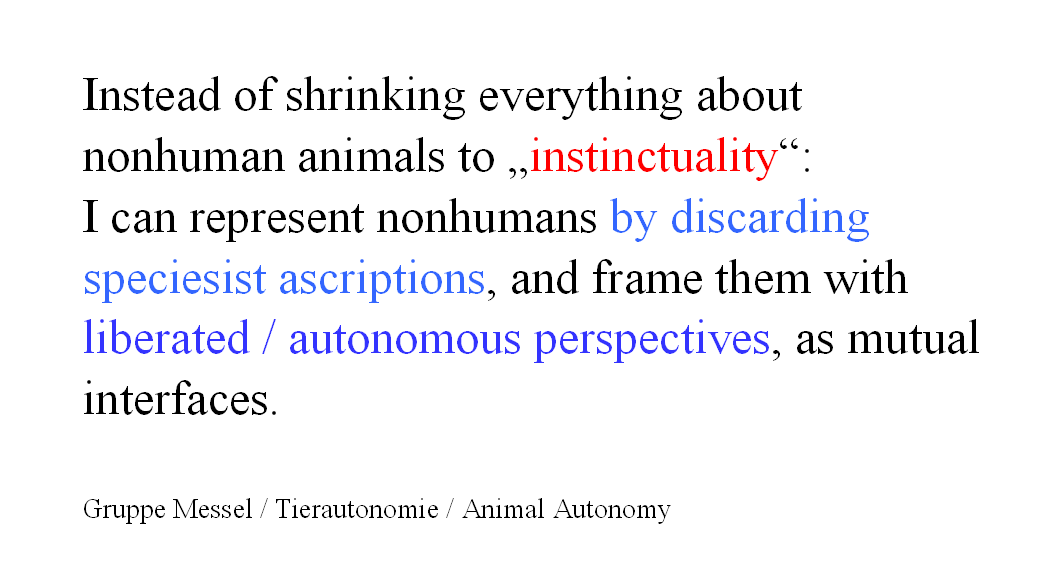 Instead of shrinking everything about nonhuman animals to “instinctuality”: I can represent nonhumans by discarding speciesist ascriptions, and frame them with liberated / autonomous perspectives, as mutual interfaces. 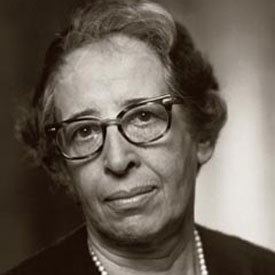 “Solidarity: all terms of solidarity still purport the first and most basic solidarity between all humanity (i.e. of “the human”) against nature. Such a solidarity of one against everything else is yet never allowed amongst humans themselves. But there is no such thing as a necessity of solidarity. The idea of us all “sitting in one boat” is an example of this wrong idea of an absolute solidarity.

The concept of a group, with its relatedness of the part-and-whole category, stems from the solidarity of the human against nature.”

I assume we all know more or less who Oliver Cromwell was:

“Oliver Cromwell (25 April 1599 – 3 September 1658) was an English military and political leader best known in England for his overthrow of the monarchy and temporarily turning England into a republican Commonwealth, and for his rule as Lord Protector of England, Scotland and Ireland.” ( http://en.wikipedia.org/wiki/Oliver_Cromwell )

I never knew that they posthumously desecrated his body:

“On 30 January 1661, (symbolically the 12th anniversary of the execution of Charles I), Oliver Cromwell’s body was exhumed from Westminster Abbey, and was subjected to the ritual of a posthumous execution, as were the remains of John Bradshaw and Henry Ireton. (The body of Cromwell’s daughter was allowed to remain buried in the Abbey.) His body was hanged in chains at Tyburn. Finally, his disinterred body was thrown into a pit, while his severed head was displayed on a pole outside Westminster Hall until 1685.”

And this guy took over and restored the monarchy: 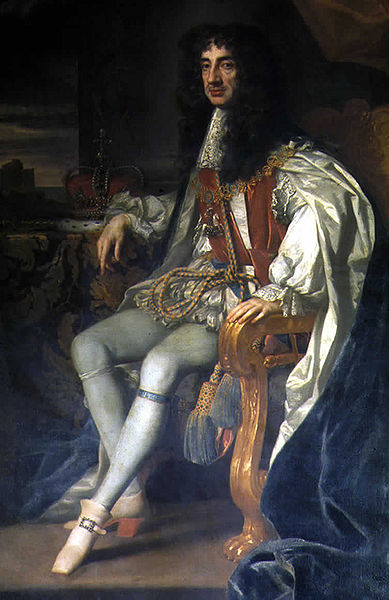 What a creepy history that is.

The question remains open how big of a role a religious understanding plays a role in upholding monarchy and aristocratic entitlements as a “natural” yet god given hierarchical societal order, or if it’s the plain interest of a conglomerated group to hold their interests in power in one hand, with one center of power.

Came across this interesting finding by Prof. Marija Gimbutas on the meaning and origin of “Hulda” as in the tale “Mother Hulda”.

Marija Gimbutas names Hulda (or Holda, Holla, Holle) as having originally been an ancient Germanic supreme goddess who predates most of the German pantheon, including deities such as Odin, Thor, Freya and Loki, continuing traditions of pre-Indo-European Neolithic Europe. (Gimbutas, Marija, The Living Goddesses (Berkeley: University of California Press, 2001.)

What I find striking about specifically the tale “Mother Hulda” is that no princess and princesses play any role in it. Also there are no male protagonists, apart from that. The entire narrative is one happening amongst women and other entities and phenomena (the tree, the oven, the house, the snow, the well, the gold, the garden).

Anyway I checked out more info about Prof. Gimbutas and was amazed at her body of work and her approach of what she calls “archeomythology”.

The titles that interest me most are:

The Language of the Goddess

The Goddesses and Gods of Old Europe: Myths and Cult Images

The Civilization of the Goddess

Goddesses and Gods of Old Europe

Age of the Great Goddess: Ancient Roots of the Emerging Feminine Consciousness