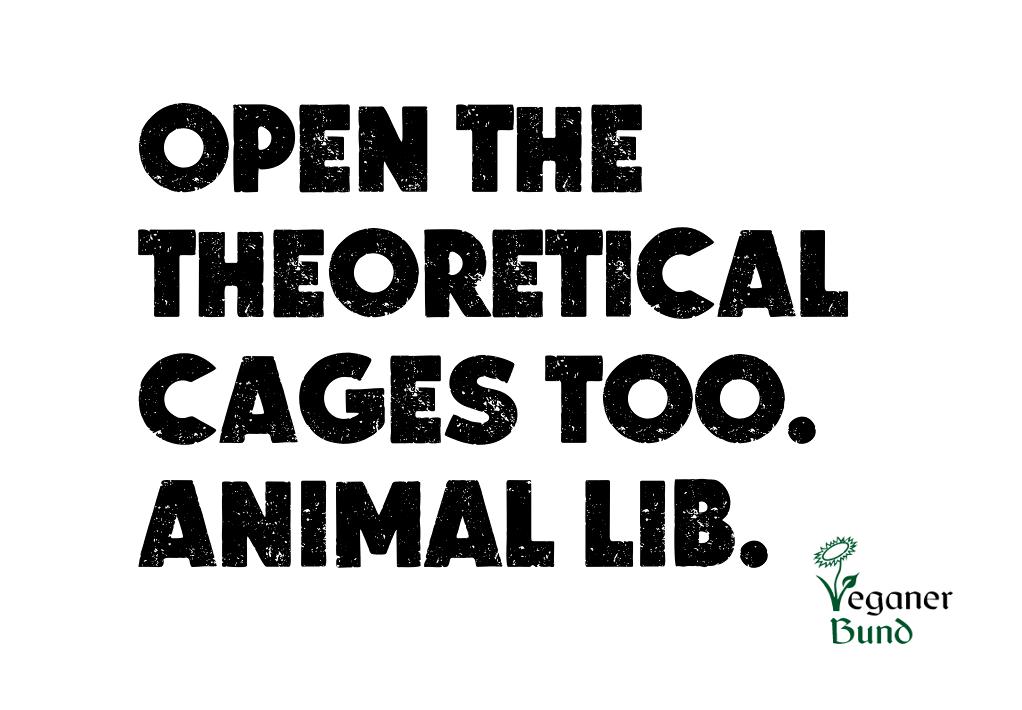 ​I personally don’t know where even any total liberation activists stand in detail. Of course it’s decisively crucial that the interest in nonhuman-related-ethical-issues is continuously gaining momentum, and every event (or activity, or even thought) that is taking place to grow this momentum is an active expression of an overall ethical development evoluting in our societies. I believe in such developments, and I believe they are driven by many different forces and factors.

I am however generally suspicious of the internal structures of movements, for as long as an idea hasn’t taken ground and formed solidly enough in a society for it to be expressed pluralistically enough, so that you can argue with a full spectra of positions.

The canon of Animal Liberation or AR has strong tendencies to be unisono, and I blame that on the movements inner dynamics. And it is this narrowness within the movement why  I always try to double check what exactly is being practised and promoted beyond the bigger messages of any strongly idealistic event.

With total liberation events so far nothing seems transparent to me, structurally more than from the given goals and intentions.

I for myself prefer solutions to be less “total” and more sticking to the realities of the details.

Yours,
Just another fellow AR activist

The Humane Society of the United States is worse than I ever wanted to believe. How can the abolitionist approach by any means go together with the (not even) welfarist approach, as is suggested by Melanie Joy for instance as read in a reprinted article by hers on http://james-mcwilliams.com/?p=2560. (The divergence here is really about how factually nonhuman animals are understood and politically defended.)

HSUS staffer Maxwell speaks of “moving 900 to 1100 fat hogs each week,” for which he is paid $1.04 a pound, and tells how he sees his job as expanding the market for “humane” meat.

HSUS: Carving Out a Niche for Family Farmers One Campaign at a Time

I don’t think it’s necessary that the different sides get along with each other, when the point of the argument is irreconcilable. I think it’s more important to look for a consensus between people who are seriously concerned about animal issues, outside and inside of the pro animal rights movement.

Animal rights are as immediate a concern to many humans, as human rights are.

Still people within and without the “movement” can, as long as they are positively concerned, find common grounds on which they can

a.) reinforce and be mutually supportive and innovative about the practice of living an ethically responsible lifestyle as what regards nonhuman animal concerns,

and b.) people within and without the “movement” can find common grounds as what regards their attitude towards nonhuman animals, on which they can establish and grow a political fundament for phrasing a future full-rights-establishing-language of an animal rights law.