Anti-Semitism in the Animal Liberation movement cloaked as pacifism

An article on the website Resistance Ecology: Animal Liberation Against Israeli Occupation, We Stand With Palestine (08/13/2014) asks us to assume that all Israeli animal advocacy is in reality Israeli propaganda, and that only Israel (and the US) are culprits to blame for speciesism and ecocide. Really? For the sake of peace we are gonna buy that, the same old scapegoating that all evil is to blame on a (quote): “Zionist program”?

Someone quoted that article on a ethical vegan anti-racist facebook group – that’s how I came across it:

“Although there is a growing movement for animals in Israel, it is important to recognize that this cannot be separated from the colonial policies of the occupation. The dominant narrative is that the Palestinian people are unwilling or incapable of animal advocacy, that they are “primitive” and “barbaric” and thus deserving of occupation by the “green”, “humane”, and “progressive” Israeli state. The reality is that Israel is overwhelmingly destructive to animals, the land, and the people, and has displaced traditional systems and indigenous land to pave way for urban expansion, polluting industries, animal agriculture, road development, water scarcity, and the brutal oppression of the Palestinian people.”

You would think there would be critique of this kind of rhetoric, yet there wasn’t. So I really wonder why anti-semitism, when it’s in the context with the Gaza conflict, goes unnoticed even on anti-racist forums?

I wonder what people really think …

a.) What do they think about what led to the founding of Israel?

b.) Would someone really be willing to assume that all Israeli vegan AR activists are basically doing propaganda and not wonder him-/herself if she/he might hold a rather extreme prejudices against others?

c.) What about other wars now and in history, why are people making wars at all?

d.) This is a difficult question but: Why are we more critical when anything has something to do with the newer ethics of veganism and AR? Why do we tend to undermine such newer efforts when there is no predefined ethical space for them in society yet and additional conflicts occur?

Finally: Do we discuss other forms of atrocities and propaganda going on in the same finger-pointing fashion these days?

There is so much anti-semitism going on. I am really irritated about finding such a direction within the Animal Liberation movement. The mistakes of Israeli politics and the role of religious conflicts given in this context are one thing, but now saying that all vegans and AR people in Israel are having a fake agenda and would be only doing colonialist and settler politics, ignores historical backgrounds and, along with that, evokes bigotry.

Palestinian and Israeli activists have been working together in veg/AR. Look at how these new plants are being crushed amongst the big conflicts. To incite such a witch hunt on fellow AR activists, from anywhere, is unpacifist.

The Israeli group 269 posted on their FB page: 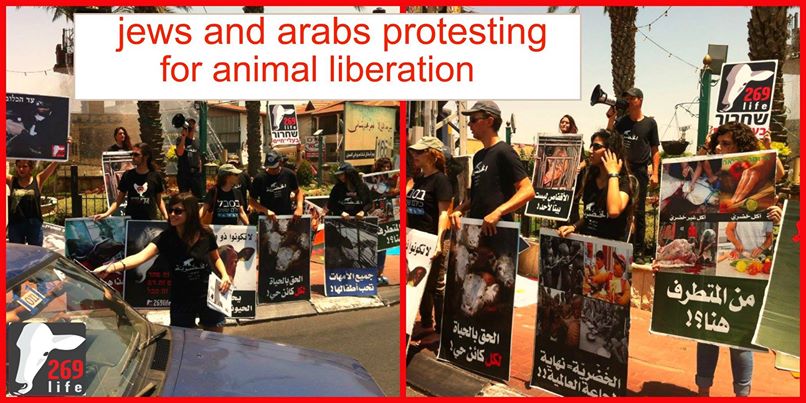 Today,the 27th of June 2014, 269Life Israel joined their Arab brothers and sisters in the Arab village of Shefa-‘Amr (شفاعمرو), to protest for animal liberation.

Many of the passersby were very supportive and took brochures to read further on the issues and hopefully it will bring about more change in the region.

Politics and nationalism means nothing, as long as the animals are suffering and dying by the billions, all over the world. We fight as one, unified and in coexistence.