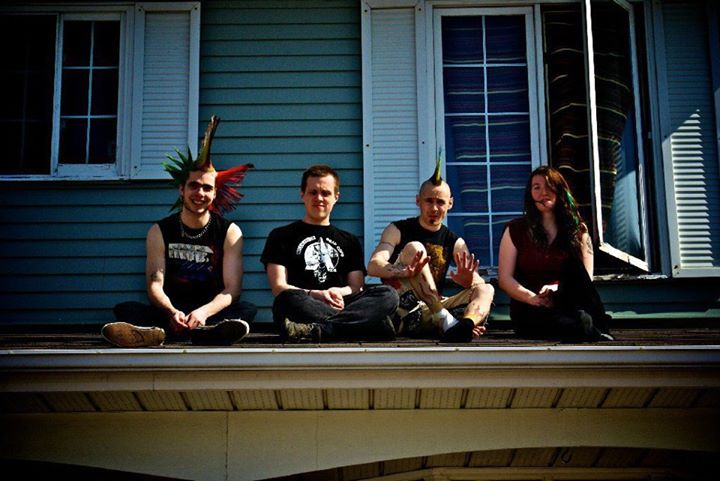 Cody, multitasking member of the political hardcore punk band Knives and Forks for Freedom from Canada, tells us his thoughts on the complexity of ethical veganism:

For me, living in the industrial capitalist world, there is almost no reason not to be vegan. I believe that not enough people are truly aware of the consequences of supporting industrial animal agriculture. It is safe to say that the majority of the population is mostly unaware, or chooses not to acknowledge the reality of the practices of factory farming and slaughterhouses. Animals are born into a life of confinement in poor conditions until their brutal slaughter, very often done without anaesthesia. It’s very obvious that this is the reason slaughterhouses are not made of glass walls and are often located in remote areas, safe from public awareness. Otherwise, so much less people would knowingly support this industry.

I generally have a reasonably optimistic view on humanity though. I’m sure most people would be opposed to these practices if they were more aware of them. After all, many people like animals, such as their pets. No one would want their dog or cat to have to experience a life of confinement, neglect and torture. But because of the complete disconnect with where this food comes from, no one really thinks about it. It seems that most people are led to believe in vague myths that this food comes from traditional family farms where animals live happily. But instead, what we have is intensive factory operations whose primary goal is to create profit as efficiently and cheaply as possible.

On top of all of this, industrial animal agriculture generates so much pollution and causes great environmental damage. It also requires so much more grains, soy and water to feed livestock than the food created from plants. It’s just very inefficient and unsustainable. So by simply refusing to support the industry, it creates less demand for the products and then creates less harm. So for me, the refusal to support these industries is also rooted in an anti-consumerist and anti-capitalist way of thinking.

At a larger level, we live in a culture based on hierarchy and power. Animal’s being forced to spend their lives in confinement and poor conditions for people’s benefit is one example of that. I think we’re also vaguely led to believe in a “survival of the fittest” myth, which ultimately just serves to normalize the idea that it’s completely fine for the dominant class to rule and exploit those who they consider “inferior”. In the case of non-human animals, this denies them their sentience and their own right to live. As such, it’s absolutely essential to be critical of power relations in all levels in society. In the case of veganism, it is simply about making small daily choices to simply not support industries built on exploitation. Our comforts and pleasures should not exist at the expense of the lives of others.

Well I know it’s not the best you’ve ever had,
but I sure don’t think it’s all that bad.
Is it enough knowing that nothing living had to die?
I know you’re used to your meat, but soy is worth a try.

The cows never saw it coming,
relaxing in the green pastures of lies,
never knowing the humans’ insatiable hunger.
No time for this cow now, but who is next?!
Please don’t eat me!

“This tofu tastes terrible”, is all you can ever say.
And “who cares about a fucking cow anyway”,
but have you ever thought about the life they live?
We take so much from this planet, that we never give.

To the death you’d argue it’s about health for you.
Well what’s good for that cow to eat, is fucking good for you too.
If we planted that grain in the fields where they eat,
it would end world hunger and no one would have to eat meat.

There’s no reason for us to still do this.
We have the technology to surpass this savageness.
Humans are much smarter than all other animals on earth,
but when we act like animals,
do we doom ourselves to die…like animals?!

Dic of the Hour

The dictator of choice wasn’t chosen by you,
but chosen for you.
Believes in America and his country,
believes we do not have a voice.

Put in place, by the powers that be.
I’ve learned enough, they’ll never have control of me.
I’ll keep screaming, ‘til I have no voice.
One day, we’ll remove the dictator of choice.

They laugh, while you slave for your daily food.
People are slaughtered in the streets every minute,
people just like you.