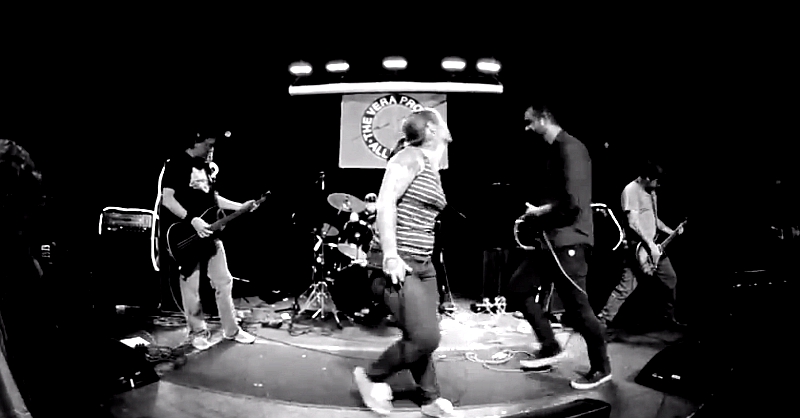 We have asked Chris LaPointe, co-singer of Olde Ghost from Seattle Washington about ethical veganism and intersectionality

First, I’d like to appreciate the fact that you acknowledge veganism and its intersectional subjects. All too often I have encountered the inability of humans to make and understand the connections between these issues. At face value some of these issues may not seem to be related but as you delve deeper conceptually there are definitely connections. That’s one of the aspects I like most about these forums and discussions; making deeper, more meaningful connections. I think the main thing we need to recognize and promote is this interconnectivity. We need to not only promote this in our relatively small community but beyond to the global community.

As a career, I’ve worked with environmental organizations for more than a decade. One of the situations that always leaves me feeling perplexed, confused and oftentimes upset is how people so devoted to the protection, preservation and rehabilitation of the physical environment seem to lack the true understanding of the connection between veganism and the impacts a meat based diet has on the environment. In these discussions I’ve had a lot of people counter with “well, the meat I eat is free-range therefore its ok” or some blind attempt to dismiss the topic by discussing the negative impacts of soy bean production or the fact that the vegan lifestyle is just “extreme.”

Although it’s a lame attempt to dismiss the premise of veganism and deflect the conversation I fully acknowledge the impacts of soy bean production and agriculture as a whole have on the environment and the people living and working in those areas. I would really like to see these type of topics discussed further. With that, I really believe this correlation needs to be addressed, researched and discussed. The common denominator, I believe, is there are too many people on earth competing for limited resources. Ultimately, those with money and power are the ones who “succeed” due to exploitation of the land, farmers and other people living in the area in which the agriculture is taking place. This then brings to the surface a number of social justice and environmental justice connections.

As a band, Olde Ghost really doesn’t have these deeper political conversations. It’s kind of assumed. We are comprised of people who have been friends for years, are all vegan and some are straight edge. Seldom do we have deep political conversations but we all are grounded in living a compassionate, thoughtful lifestyle. A lot of the lyrics I write are very political and address these issues but we try to convey our message through thoughtful actions as opposed to the in your face, we’re trying to convert you to veganism approach. A majority of the shows we play are benefit shows for local organizations who’s missions are related to animal welfare or humanitarian efforts. For example, all of the proceeds for our next show in September will be donated to the Precious Life Animal Sanctuary.

For me personally, living a vegan lifestyle just makes sense. As a child I always wanted to do something with my life that had a positive impact on the world. Growing up as a punk rock kid I was exposed to a lot of new music and ideals that I would have not otherwise been introduced to (in rural Florida and later on Arizona). One line in one song by one somewhat obscure 80s DC punk band changed my life forever. The song entitled “Name in Mind” by Soul Side changed the way I thought about the food we eat and where it comes from. This is a great song because they not only talk about not eating a meat based diet but they look at the related issues such as human exploitation. From that point on (1988) I assumed a meat free diet. I felt as though veganism was the next plausible step in my life, my belief system and the impact I can have on the environment and non-human animals. Becoming vegan is the most profound decision I’ve made in my life. I will stay committed to a vegan lifestyle until the day I die.

As the smoke settles and the ash returns to earth
and the air becomes clear…
Eyes red a glaze stare into space seeing nothing, still.
It will never be the same. Never be the same again.
Convicted are forgotten. Innocent are brought to slaughter.
Locked away, despised, ignored.
What fucking crime is worse?
Lifestyles of compassion or the ten billion you commit every year?
Ten billion crimes a year.
“If we ever get out of this alive,” she said, “I’ll do it all again. That’s right, I’ll do it all again”.
We are but one.
The rest is up to you.

The song that Chris mentioned: ‘Name in Mind’ by Soul Side