If veganism excludes in the ingestion of animal parts, why not the visible use as objects to watch for trifle reasons. Does anybody have to see death on display in order to get enlightened, informed or educated? And even that would be a trifle reason to objectify the psychical integrity of a dead animal.

Who would it be okay to display? Whose body parts would you display? Unter what circumstances?

A human is supposed to look relativeley anonymous in order to be publicly diplayed, with nonhuman animals people suppose their individiality does not count “as much” when taxidermically prepared. We face many double standards in who can be and who can’t be displayed and the manner and purpose of displayal.

A long and highly problematic issue. However as vegans and even more so as animal rights and animal dignity allies we state that:

bodys and body parts of animals are ethically extremely problematic and should never be used in exhibits – neither in informative nor in arts displays. The only exceptions should meet equal standards such as in e.g Guidance for the Care of Human Remains in Museums, or Exhibition Ethics, meaning equally, nonhuman animal remains should if also only be exhibited as valid agents of (inter-species) social life, taking into consideration the physical integrity and diginty of an individual nonhuman animal’s life. Everything else comes down to an objectification of nonhuman animals. 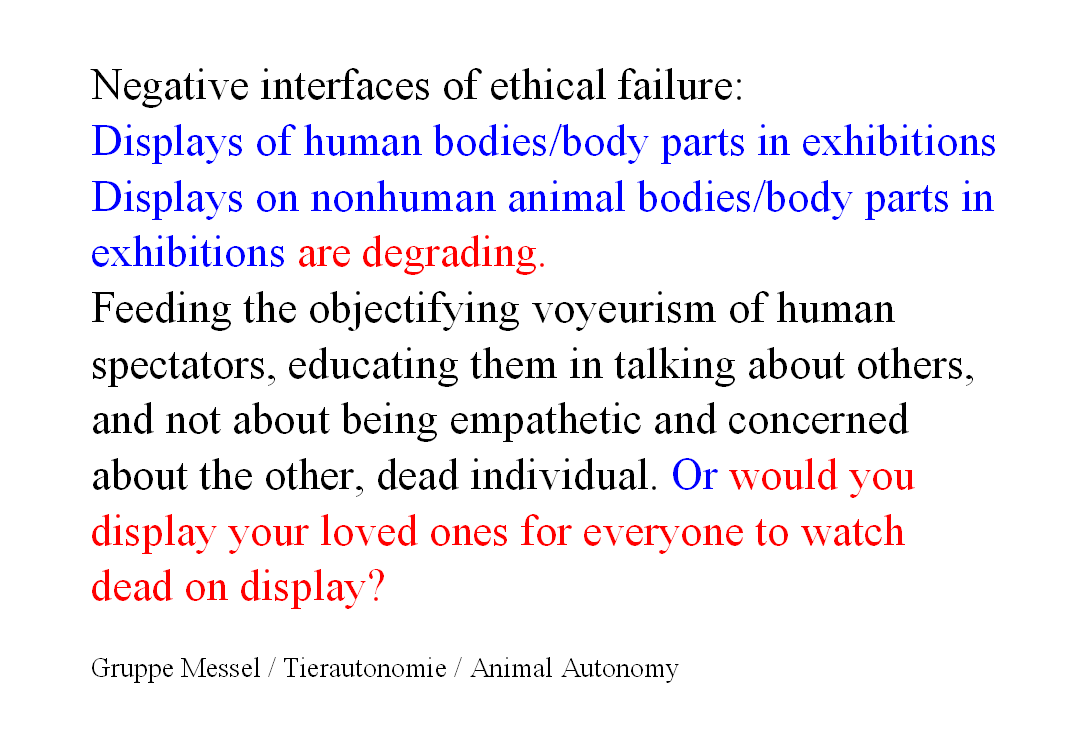 Negative interfaces of ethical failure:
Displays of human bodies/body parts in exhibitions
Displays on nonhuman animal bodies/body parts in exhibitions are degrading.
Feeding the objectifying voyeurism of human spectators, educating them in talking about others, and not about being empathetic and concerned about the other, dead individual. Or would you display your loved ones for everyone to watch dead on display?