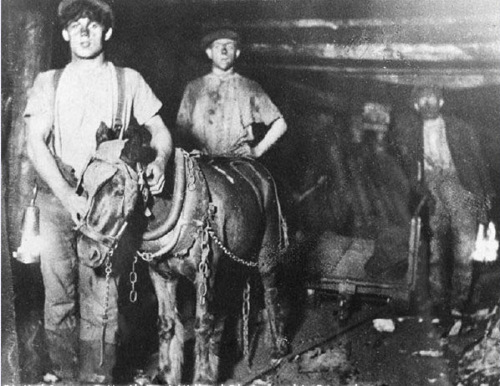 […] They all recognized the horse, with his head bent back and stiff against the plank. Whispers ran around:

It was, in fact, Trompette. Since his descent he had never become acclimatized. He remained melancholy, with no taste for his task, as though tortured by regret for the light. In vain Bataille, the doyen of the mine, would rub him with his ribs in his friendly way, softly biting his neck to impart to him a little of the resignation gained in his ten years beneath the earth. These caresses increased his melancholy, his skin quivered beneath the confidences of the comrade who had grown old in darkness; and both of them, whenever they met and snorted together, seemed to be grieving, the old one that he could no longer remember, the young one that he could not forget. At the stable they were neighbours at the manger, and lived with lowered heads, breathing in each other’s nostrils, exchanging a constant dream of daylight, visions of green grass, of white roads, of infinite yellow light. Then, when Trompette, bathed in sweat, lay in agony in his litter, Bataille had smelled at him despairingly with short sniffs like sobs. He felt that he was growing cold, the mine was taking from him his last joy, that friend fallen from above, fresh with good odours, who recalled to him his youth in the open air. And he had broken his tether, neighing with fear, when he perceived that the other no longer stirred.

Mouque had indeed warned the head captain a week ago. But much they troubled about a sick horse at such time as this! These gentlemen did not at all like moving the horses. Now, however, they had to make up their minds to take him out. The evening before the groom had spent an hour with two men tying up Trompette. They harnessed Bataille to bring him to the shaft. The old horse slowly pulled, dragging his dead comrade through so narrow a gallery that he could only shake himself at the risk of taking the skin off. And he tossed his head, listening to the grazing sound of the carcass as it went to the knacker’s yard. At the pit-eye, when he was unharnessed, he followed with his melancholy eye the preparations for the ascent — the body pushed on to the cross-bars over the sump, the net fastened beneath a cage. At last the porters rang meat; he lifted his neck to see it go up, at first softly, then at once lost in the darkness, flown up for ever to the top of that black hole. And he remained with neck stretched out, his vague beast’s memory perhaps recalling the things of the earth. But it was all over; he would never see his comrade again, and he himself would thus be tied up in a pitiful bundle on the day when he would ascend up there. His legs began to tremble, the fresh air which came from the distant country choked him, and he seemed intoxicated when he went heavily back to the stable.

At the surface the colliers stood gloomily before Trompette’s carcass. A woman said in a low voice:

“Another man; that may go down if it likes!”

But a new flood arrived from the settlement, and Levaque, who was at the head followed by his wife and Bouteloup, shouted:

“Kill them, those Borains! No blacklegs here! Kill them! Kill them!” […]

[…] At the bottom of the shaft the abandoned wretches were yelling with terror. The water now came up to their hips. The noise of the torrent dazed them, the final falling in of the tubbing sounded like the last crack of doom; and their bewilderment was completed by the neighing of the horses shut up in the stable, the terrible, unforgettable death-cry of an animal that is being slaughtered.

Mouque had let go Bataille. The old horse was there, trembling, with its dilated eye fixed on this water which was constantly rising. The pit-eye was rapidly filling; the greenish flood slowly enlarged under the red gleam of the three lamps which were still burning under the roof. And suddenly, when he felt this ice soaking his coat, he set out in a furious gallop, and was engulfed and lost at the end of one of the haulage galleries.

A roaring sound came from afar; they could not understand this tempest which approached them, spattering foam. And they cried out when they saw a gigantic whitish mass coming out of the shadow and trying to rejoin them between the narrow timbering in which it was being crushed.

It was Bataille. On leaving the pit-eye he had wildly galloped along the dark galleries. He seemed to know his road in this subterranean town which he had inhabited for eleven years, and his eyes saw clearly in the depths of the eternal night in which he had lived. He galloped on and on, bending his head, drawing up his feet, passing through these narrow tubes in the earth, filled by his great body. Road succeeded to road,. and the forked turnings were passed without any hesitation. Where was he going? Over there, perhaps, towards that vision of his youth, to the mill where he had been born on the bank of the Scarpe, to the confused recollection of the sun burning in the air like a great lamp. He desired to live, his beast’s memory awoke; the longing to breathe once more the air of the plains drove him straight onwards to the discovery of that hole, the exit beneath the warm sun into light. Rebellion carried away his ancient resignation; this pit was murdering him after having blinded him. The water which pursued him was lashing him on the flanks and biting him on the crupper. But as he went deeper in, the galleries became narrower, the roofs lower, and the walls protruded. He galloped on in spite of everything, grazing himself, leaving shreds of his limbs on the timber. From every side the mine seemed to be pressing on to him to take him and to stifle him.

Then Étienne and Catherine, as he came near them, perceived that he was strangling between the rocks. He had stumbled and broken his two front legs. With a last effort, he dragged himself a few metres, but his flanks could not pass; he remained hemmed in and garrotted by the earth. With his bleeding head stretched out, he still sought for some crack with his great troubled eyes.

The water was rapidly covering him; he began to neigh with that terrible prolonged death-rattle with which the other horses had already died in the stable. It was a sight of fearful agony, this old beast shattered and motionless, struggling at this depth, far from the daylight. The flood was drowning his mane, and his cry of distress never ceased; he uttered it more hoarsely, with his large open mouth stretched out. There was a last rumble, the hollow sound of a cask which is being filled; then deep silence fell.

She had seen death. The fallen shaft, the inundated mine, nothing had seized her with such terror as this clamour of Bataille in agony. And she constantly heard it; her ears were ringing with it; all her flesh was shuddering with it.