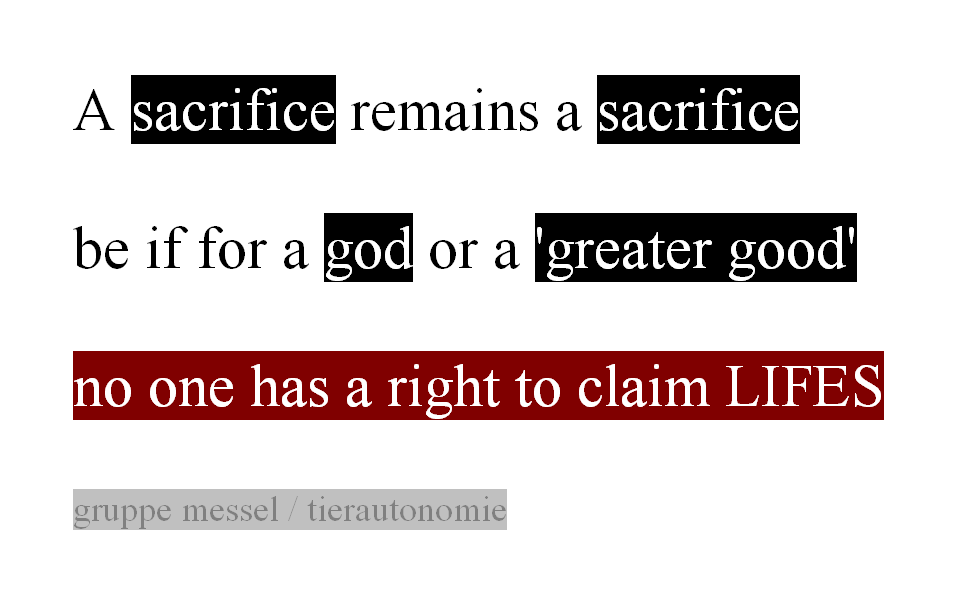 Ok I too heard about the 2 male persons who wanted to kill this time a sheep “for art”. A public speciesist execution. When speciesism comes in a new dress it’s something new? I doubt it.

However I vote for Mark Marek of BestGore.com for recently stating in an interview this about his viewpoint on violence against nonhumans …

Best Gore exposes the true nature of fleshy viruses but I never post any animal suffering.

MM – I post uncensored reality. Myself and other Best Gore members are people who don’t live with rose tinted sunglasses permanently mounted on our faces. On Best Gore, we have a name for human beings which was forged on the site – we call them Fleshy Viruses. Best Gore exposes the true nature of fleshy viruses but I never post any animal suffering.

I did many interviews today and could tell that many reporters were disappointed to learn that they were speaking with biggest pacifist they’ve ever met in their entire lives. Perhaps it would make for a better mainstream story if I wore black latex clothes and bragged about how many animals I dissected in the past, but truth is neither myself nor any of regular Best Gore members would hurt a fly. We’re on Best Gore because we despise violence and cruelty of one who’s predisposed to be stronger against one who’s predisposed to be weaker. And we the people who don’t drive recklessly, don’t drive impaired, don’t beat other people up and don’t draw pleasure from kicking a man on the ground, we can’t stand animal suffering and that’s where I draw the line with content on Best Gore.

It’s just a shame that Mark Marek now refers to people opposed to BestGore.com as “sheep“. I can understand the idea of dealing in such ways with intra-human aggression, yet all violence is an endless problem, even if in varied, different ways.