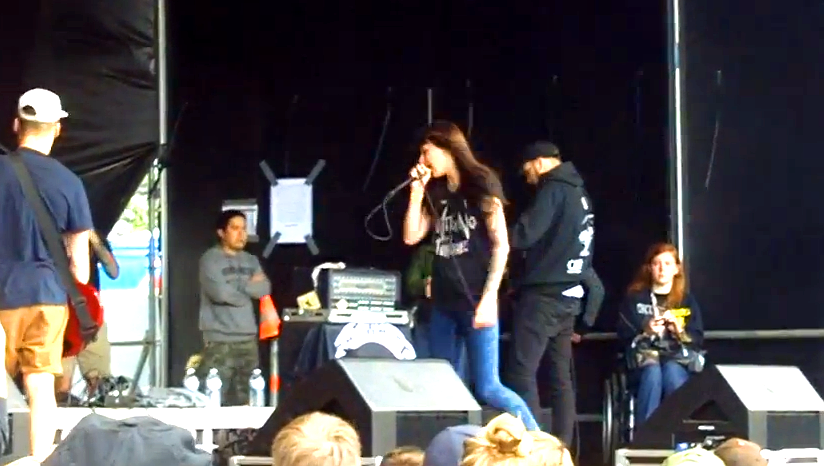 Wolf X Down guitarist Tobi stated it for us:

Veganism to us is not just a diet, as declared by lifestyle vegans that see it merely as a way to stay healthy. It’s a conscious ethical decision of causing the least suffering and harm done to the planet and its inhabitants. Thus, we don’t feel that veganism is “giving up your favorite products and food”, as meat-eaters like to put it into question: “Don’t you miss xy?”. No and no. No, because there’s just about every delicious meal in a tasty cruelty-free vegan version and no, because there’s just no other way. It’s not a choice that is open to anyone. You’re not free to choose if you wanna hold yourself a slave or not, are you? So why do we think it’s everyone’s personal decision to exploit, torture and murder animals?

Despite all this, veganism is a means, not an end. We don’t think real change is to come from simply boycotting products and sharing your favorite raw food recipes. Be honest to yourself, veganism alone is not even saving animal lives. Thus, veganism is to be used as a stepping stone only. The consensus of our society about animal exploitation will not be broken without further action. If we want to achieve animal liberation, the animal rights movement needs to become a political and social movement just like the abolitionist one. The abolition of slavery and struggle for Black people was not won by boycotting cotton. To be successful, a movement needs a broad bandwidth of actions. And the direct actions of sabotage, property destruction and animal liberation carried out by underground ALF activists are just as vital as the clean-cut vegan on the TV talk show. So let’s raise our voices to be heard, and never forget, thousands of individuals are being tortured, mutilated and killed right this second: “I am aware, that many object to the severity of my language; but is there not cause for severity? I will be as harsh as truth, and as uncompromising as justice. On this subject, I do not wish to think, or speak, or write, with moderation. No! no! Tell a man whose house is on fire, to give a moderate alarm; tell him to moderately rescue his wife from the hand of the ravisher; tell the mother to gradually extricate her babe from the fire into which it has fallen; — but urge me not to use moderation in a cause like the present. I am in earnest — I will not equivocate — I will not excuse — I will not retreat a single inch — AND I WILL BE HEARD. The apathy of the people is enough to make every statue leap from its pedestal, and to hasten the resurrection of the dead.” – William Lloyd Garrison, American abolitionist

In a wider context, veganism to us is part of a struggle for total liberation, including not only non-humyn, but also humyn animals. Just as humiliated womyn and people of color or of different ethnic and cultural backgrounds striving for true equality, the gay couple or queer- and trans-people striving for acceptance, people with disabilities for support, refugees for shelter and animals for a right to live without suffering and exploitation, we all aspire to be free and healthy. Not the same, but equal. Only by exposing the commonalities in the different forms of oppression and understanding the nature of the hierarchies and the mentality of the oppressing forces towards their subjects, we can find a way to mutually improve, amend and progress in fighting back, united and strong: “Unity of oppression”. When fighting our own separate fights, we may dismantle and maybe break out the one or two specific spokes that represent our pain in the wheel that is oppression, but it won’t stop the wheel from turning, it will still continue to roll over our comrades. Thus, to achieve our goal of true and lasting liberation, we need to reach hands and make it one common struggle for liberation, to build a unity of the oppressed and break all the spokes in this seemingly everturning wheel:  “So you can stay cool behind your window and choose the view you want to see. But as long as there are others held captive, do not consider yourself free.”

Wolf Down – No Silent Approval

while the blood drips off the blade the cries still resonate
estranged, cut into pieces – rediscovered on your plate
you stop at nothing for the privileg of taste
like a panel of judges you’re deciding their fate

born in misery, abused – got nothing to lose
exploited for profit therefore you breed by humyn greed
this machine that turnes lives to products is called tradition
your silent approval – what an imposition!
individuals – facing perversion by superior forces
social, sentient beings degraded to resources
you stop at nothing for the privileg of taste
like a panel of judges you’re deciding their fate

this is about freedom, this is about compassion,
abolish exploitation – animal liberation!
The time has come – to break this culture of death

From Wolf x Down’s 2013 album release STRAY FROM THE PATH.